Upgraded the processors and software on the radar server to handle NEXRAD 2 minute and TDWR 1 minute frequency, lowest level reflectivity and velocity scans from all 160+ sites.

This is a significant temporal increase in resolution from the 6 minute updates we originally received from the NEXRAD and TDWR radars.

The new imagery is now available for all sites.

A fix to an internal network error has corrected a problem with the GFS Tropical Sector.  It is now working again on the 12Z 5/25/2016 run.

The GFS Spring 2016 upgrade was completed today as of 12Z. This was the long awaited upgrade that included the 4DVar inclusion.

For more details on the all the changes to the GFS model see the NCEP technical attachment. In short there should be some improvement in the model performance, but overall there will not be a significant leap in model accuracy with this one upgrade.

Some of the NAM-4km Severe Weather Fields were not being updated due to a bug in the code. This has been fixed. Some of the fields that have been fixed are:

Click on the link below to go to the NAM 4km which is update 4x per day.

NCEP has been running a new version of the GFS for a number of weeks in parallel. Some important changes ahead with the new version, which will likely go into production in May.

The current GFS uses an initialization method called 3DVar, which is an older method of initialization and essentially takes a snapshot of the atmosphere when the model is started.

The new version being tested and will likely be put into production this spring will utilize a more modern method of initialization called 4D-Ensemble-Variation.  It is basically a separate model that runs constantly tracking in real-time, changes in the atmosphere so when the GFS run starts it has a much better initialization, in theory.

Verification numbers support 4DEnsVar being a much better solution.  The ECMWF has used 4DEnsVar for quite sometime.  The CMC Global model and the UKMET and even the Navy NAVGEM have  been using a version of the 4DVar for a while now.  This will bring the GFS up to par with the other global models in terms of initialization schemes.  The 4Dvar and 4DEnsVar are quite computationally expensive and up until recently NCEP didn’t have the computing resources to implement 4DEnsVar.  4DEnsVar is somewhat less computationally expensive, while providing most of the benefits of traditional 4Dvar.

More information about the ongoing GFS parallel testing can be found from this technical note from NCEP released today, with many links to various NCEP sites that have output and statistics from the new GFS developmental model.

Conditions favorable for supercells and tornadoes this afternoon will develop across Central and Eastern North Carolina into Western Virginia.  Extremely favorable shear and strong mid-level winds will combine with afternoon heating, to allow destabilization to occur at the time of frontal passage. A broken line of supercells should form by mid to late afternoon across Central North Carolina northward into Western Virginia, These cells will move rapidly northeastward beneath a 100+ knt mid-level jet.   The cells will be capable of producing violent tornadoes as they continue into the evening hours. Straight line winds of 75 mph are also possible in bowing segments or in rear flank down drafts.  There will be a considerable amount of dry air aloft which will limit the coverage of storms, but will aid the formation of the tornadoes, combined with a low lcl. 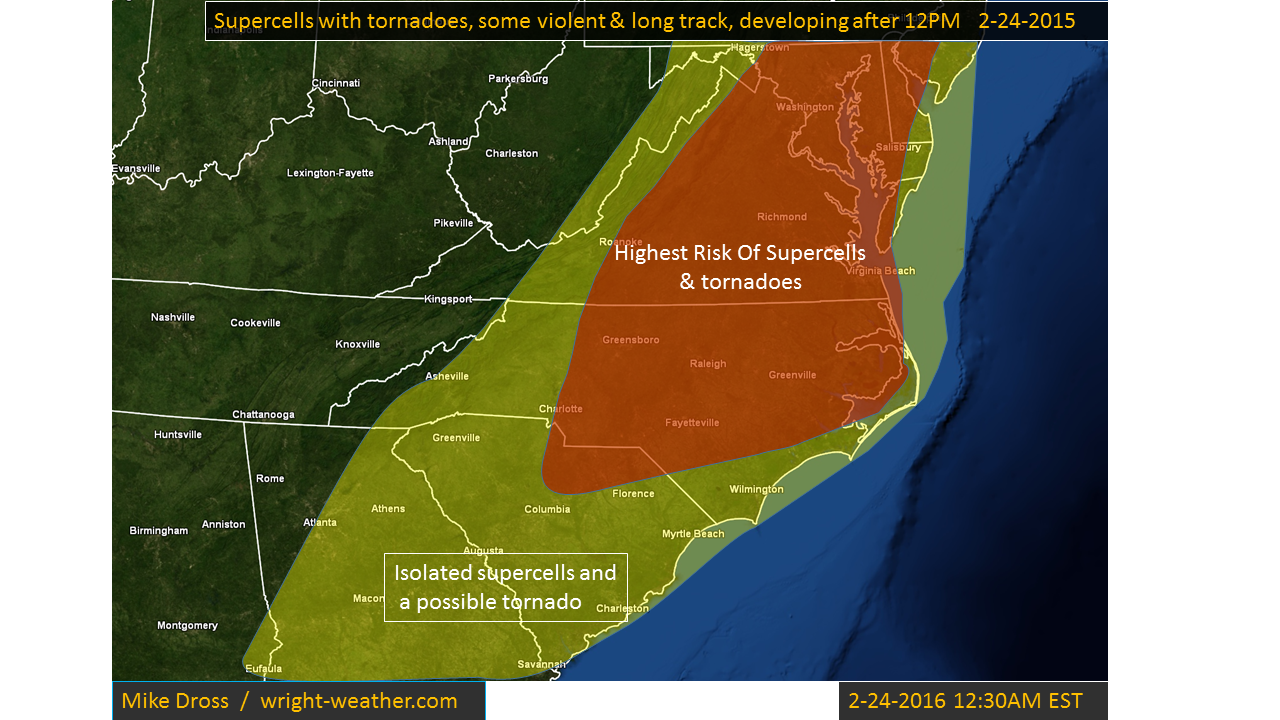 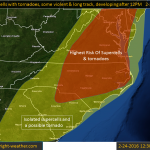 The SREF (Short Term Ensemble Forecast) system was recently upgraded to 26 members. This caused an issue with some of the SREF products not being generated. These problems have been resolved and all SREF products are again available.

Here is the link to the SREF forecast products.

Parameters favorable for widespread severe storms from the Gulf Coast northward into the Mississippi and  Ohio Valleys.  The Ohio and Tennessee Valleys are at the highest risk for widespread damaging winds. Supercells, with a few violent tornadoes are quite likely as well.

Here is a breakdown of the likelihood of severe weather in a given area, starting Wednesday morning continuing through Thursday Morning. 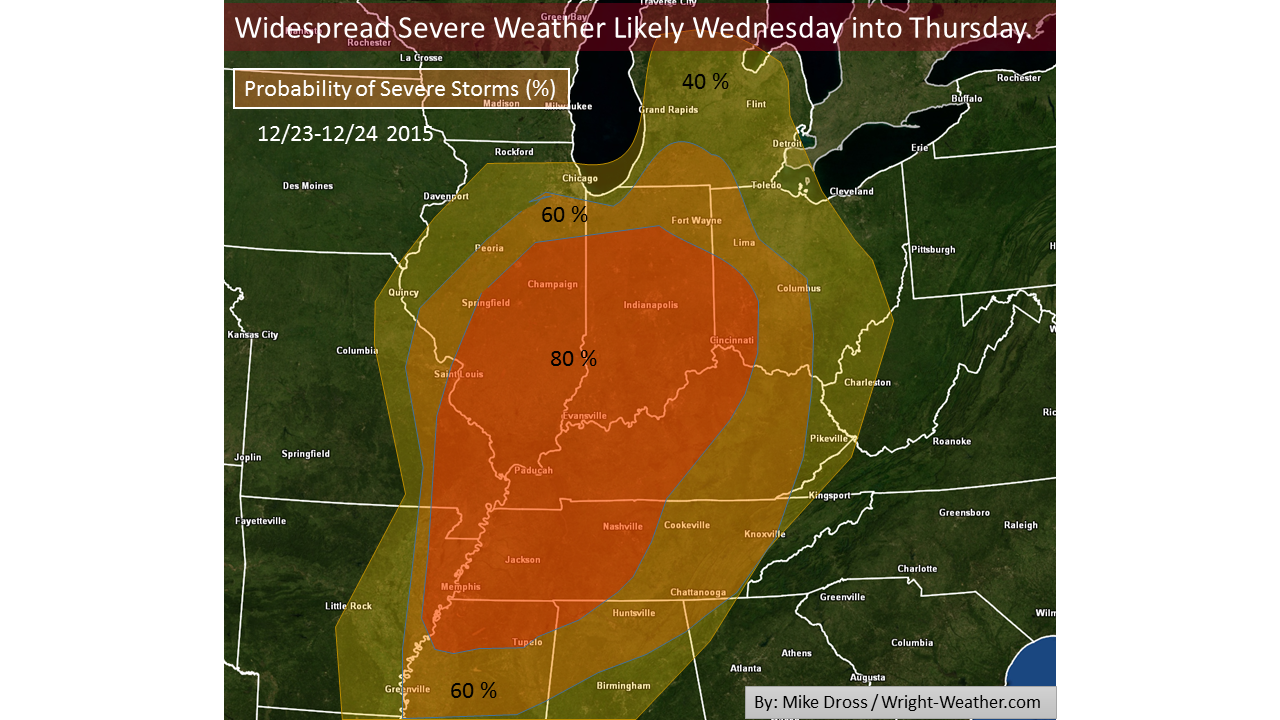 Here are the SPC Storm Reports for the Event: 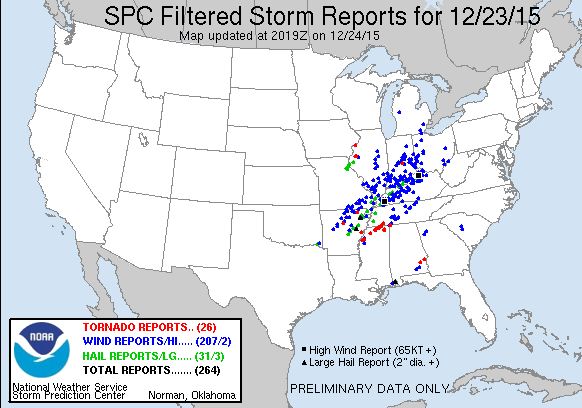 We are migrating some hardware to a new datacenter tonight (12/19). The homepage, as well as, a few other services will likely be off-line for up to 6 hours.

The following web pages will not be affected by the transition as they are running at the new datacenter.

We will post an updated when all of the migration activities are complete.

We have been busy working the past 2 weeks installing new Dell hardware and configuring our systems in a new data center.  Here are a couple of  pictures of the progress. We installed 6 new Dell Servers and will have the HP servers installed next week.

We will be switching from the backup GFS processing to the new server cluster this week and will continue migrating much of the current infrastructure over to the new data center.

We appreciate your patience as we switch over to this new hardware and new data center. 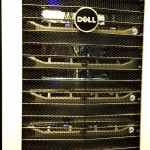 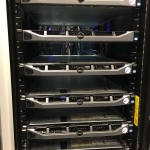